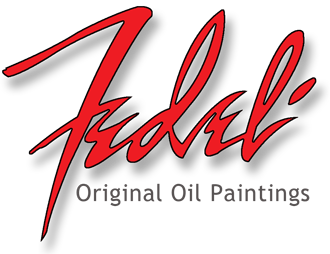 THERE ARE CURRENTLY
NO EVENTS SCHEDULED

Come to one of our shows and spend a nice weekend somewhere new. – It’s always a lot of fun, and I would love to meet you.

“I believe that as an artist, it is not my purpose to dictate what the viewer sees on the canvas, but rather to pose a question that causes them to seek the answer within themselves. Each individual brings their own life experiences into the decision, and for each of them the meaning revealed is truly unique.”

“My passion lies in reaching that inner self, and drawing it into, and out of, my art. My goal is to create a moment that touches their soul.”  ~DJ Fedeli

David is a contemporary artist whose work is reminiscent of the age of “Neo-Romanticism“, which emerged strongly in the period from about 1880 – 1910, in Britain.

His work has also been described as “surreal“, but David does not feel that description is entirely accurate…

“Quite often I hear people refer to Dali when describing my work, and while I am obviously flattered, I see very few similarities.

I feel my work is much more grounded in the reality around us… with a few subtle twists and turns perhaps, but I don’t feel it ever really moves that far into the realm of the surreal.”

“I strive to maintain a strong tie to reality, so the viewer can relate to what they see. But I also want to give them enough rope to swing out into the abyss. Only then can they allow themselves to get lost in that place they find depicted in the work.”

“Giving them that ‘lifeline’ allows them to experience deep emotion, while also feeling secure in a moment of vulnerability”. Without that moment, art does not exist.”

FedeliFineArt.com is being completely rebuilt from the ground up.

When finished, you will find in-depth information about the materials, techniques and equipment used in oil painting. I will also spotlight unique products and companies, and innovative ideas.

If you look at this painting by George Edmund Butler, Bellevue Ridge (1918), you can see a desolate landscape marred by craters. The Neo-Romantics, inspired by the harsh critique of society by the Realists, applied this to their depictions of nature, showing it as a victim of human industry and civilization. This depiction of landscapes as desolate and scarred are classic features of Neo-Romantic artists, and exemplifies the 1st characteristic of Neo-Romanticism as a critique of a society that feels no connection to the natural world that it victimizes.

Now, if we look at Henri-Edmund Cross's painting Le Bois (1906), we see a stark contrast to Butler's bleak and lifeless landscape. Cross depicts human figures, freed from culture and industry rooted, in a natural setting. Unlike the romantics who depicted native peoples in their worship of nature, the Neo-Romantics, like Henri-Edmund Cross or John Minton, chose subjects in their landscapes in more intimate settings and unconnected to tradition or social norms. This painting represents characteristic #2 from above as it shows an Utopian world where figures exist completely free of needs, like Eden.The simple white dress of the sitting figure and the blankets on the ground set the figures as modern subjects, rather than tribal or futuristic individuals. This feature represents characteristic #3: the rejection of the dichotomy of society and nature. The figures are modern and yet connected to nature, symbolizing the rejection of choosing between civilization and nature. Surrealism

Surrealism is a cultural movement that began in the early 1920s, and is best known for its visual artworks and writings. The aim was to "resolve the previously contradictory conditions of dream and reality". Artists painted unnerving, illogical scenes with photographic precision, created strange creatures from everyday objects and developed painting techniques that allowed the unconscious to express itself. Surrealist works feature the element of surprise, unexpected juxtapositions and non sequitur; however, many Surrealist artists and writers regard their work as an expression of the philosophical movement first and foremost, with the works being an artifact.

Leader André Breton was explicit in his assertion that Surrealism was, above all, a revolutionary movement. Surrealism developed out of the Dada activities during World War I and the most important center of the movement was Paris. From the 1920s onward, the movement spread around the globe, eventually affecting the visual arts, literature, film, and music of many countries and languages, as well as political thought and practice, philosophy, and social theory
We use cookies on our website to give you the most relevant experience by remembering your preferences and repeat visits. By clicking “Accept”, you consent to the use of ALL the cookies.
Cookie settingsACCEPT
Manage consent

This website uses cookies to improve your experience while you navigate through the website. Out of these, the cookies that are categorized as necessary are stored on your browser as they are essential for the working of basic functionalities of the website. We also use third-party cookies that help us analyze and understand how you use this website. These cookies will be stored in your browser only with your consent. You also have the option to opt-out of these cookies. But opting out of some of these cookies may affect your browsing experience.
Necessary Always Enabled

Performance cookies are used to understand and analyze the key performance indexes of the website which helps in delivering a better user experience for the visitors.

Analytical cookies are used to understand how visitors interact with the website. These cookies help provide information on metrics the number of visitors, bounce rate, traffic source, etc.

Advertisement cookies are used to provide visitors with relevant ads and marketing campaigns. These cookies track visitors across websites and collect information to provide customized ads.

Other uncategorized cookies are those that are being analyzed and have not been classified into a category as yet.